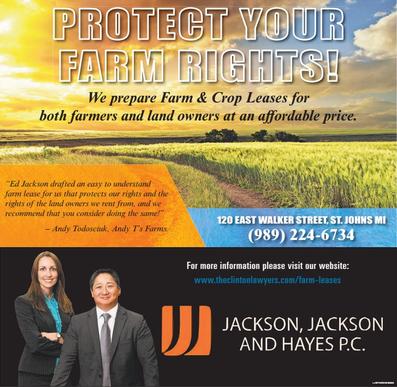 Jackson, Jackson & Hayes is currently representing multiple Clinton County area farmers as creditors in a bankruptcy. To be clear, our client was not the party that filed bankruptcy, but instead, are the land owners owed land rent.  Many years ago, Jackson, Jackson & Hayes, drafted the farm leases for these same clients at the time they rented their farm land, and our clients are very glad that we did, because it has helped secure their rights!

We know that a vast majority of land owners and farmers alike choose not to put their agreement in writing.  Many others choose to use a simple hand written note.  When times are good for both sides, and as long as the same principal people are involved in making the agreement year-after-year, usually a verbal agreement between the farmer and the land owner works out fine.

But as times change, inevitably, the land owner and sometimes the farmer change.  At this point, if the terms of the agreement are not in writing, both sides are left exposed and at risk of loss.

The Farm/Crop/Land leases that we write are usually not long or complex.  We write our leases that way on purpose because an agreement should be easy to understand.  The document simply puts in writing the rights of the farmer and the land owner.

All farm leases should include the length of the lease, the rental amount, and provisions to insure that soil conservation standards and farming practices standards will be met.

Some parties also want to include language regarding the rights of either party should a landowner die.  Other parties want to include provisions related to sub-leasing rights.

And some parties like to preserve hunting rights, or the right for timber to be harvested on adjacent property.

Other parties like to build an option to purchase into the leases themselves.

Even with provisions specific to your situation, most farm leases are not very complex to draft, and therefore are very expensive to draft.

It is far more expensive to fight in court over what rights each side when there is nothing in writing.

Recently, an area farmer that you likely all know, chose Jackson, Jackson & Hayes to draft its farm leases, and this is what Andy T had to say,

"Ed Jackson drafted an easy to understand farm lease for us that protects our rights, and the rights of the land owners we rent from, and we recommend that you consider doing the same."